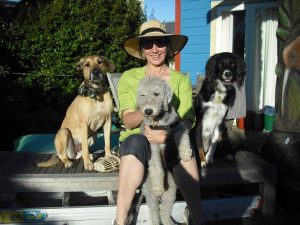 I remember so distinctly bringing puppy home! Every single one of of my babies journeys home is vivid in my mind as a special and significant event. My human baby was hard! It has to be said that it was physically, emotionally and completely on another level but those puppies that were met, collected, planned for and brought home although less physically challenging (at least for me) were also very special… each and every one.
For all those considering driving, flying or otherwise journeying to get a new puppy, I hope that a collection of my puppy collection stories might help you plan and prepare for bringing puppy home …

An spca special! She was 11 weeks when I met her. Surprising me by splitting from the group to join me at the fence line. All the others were battling each other at the gate as the handler arrived. Yet she chose me. I recognized this as, very likely, as a fluke.

My second visit and still not won over. I saw her once more break from the group to greet me. She did it again!

“Do you want to hold her?” the spca worker said. When I picked her up and held her, she relaxed into my arms as if she were home. She was! A week later I was bringing puppy home.

The trip home was short. A cardboard box in the passenger foot-well. Puppy too small to scale the cardboard wall. It took around fifteen minutes to get home. Just a little longer before we couldn’t imagine life without her. 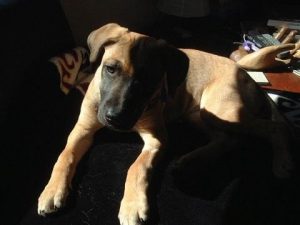 I lost Aimee at 11 years old to an aggressive muscle cancer usually found in horses. Within 10 days she went from all to nothing but the wag of a tail. Her eyes still connected. She didn’t want to be left at home for that final car ride. We carried her to the car. She was glad and had always loved the vet. It isn’t something to be underestimated and it brought me some comfort at the end.

I saw this puppy picture when they were 6 weeks. A little tri-colour poppet with a couple of his black n tan siblings. Mum (a Welsh Springer Spaniel) had had her pelvis broken by a kick from a cow whilst on a break from her pups. She didn’t come back to her puppies. All we knew about Dad was that he was next-door dairy farmers dog.

Nine in total… eight after the tractor reversed. A farmer unprepared but kind. The remaining puppies were transferred to Happy Tails (baby) animal sanctuary. I asked for the pick of the litter. Telling them about my lifestyle. I wanted a dog that was smart but also responsive, keen to work with his person. My other dog was a dog-reactive dog and needed a pup that I could train for a great recall and wasn’t too focused on other distractions. Really lucky with this family, they socialized the pups by having friends around, having little get-togethers where the puppies could mingle, get used to lots of noise. At the end of the day they got used to quiet time in a crate (I had asked them to help condition him to a crate for the journey as that was my biggest worry).

They pointed me toward a pretty tri-colour puppy they had called Bronson. This had always been the dog they had in mind for me although now he had been joined by the rest of his litter. 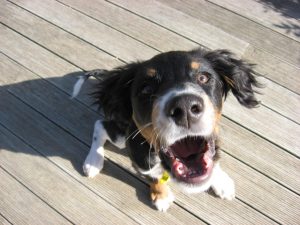 The other seven were a collection of variants of black, white and tan but only Bronson possessed all of the colours in one.  Impressively he led the entire litter around the garden and the farm. He ran, they followed … into the poop heap, under the small hole in the fence. “how long has he been up” I asked. “we knew you were coming so he’s been up since 8am. It was 2.20pm. This puppy was a machine. I recall feeling both impressed and a little bit scared but there was no way I could leave without this phenomenon.

The journey home was funny and eventful. Two and a half hours drive to the airport. We stopped often (about every 30-60minutes) but the horse poop that was consumed came forth before the first pit stop. Luckily it was confined to the crate and I had plastic bags and changes of bedding. Unfortunately there is little you can do if your puppy throws up except be prepared to clean up, have extra towels and bedding and feed just a little and often rather than filling up the puppy and losing it all. If you stop for a longer break allowing the pup to eat a bit whilst he’s feeling more settled might deem better success.

Puppies need to have water available a much as possible, so offering a drink at each stop point kept the puppy hydrated and also stimulated the need for a wee. I carried a towel to place the puppy on to pee so that his little un-vaccinated feet weren’t exposed to anything that might lurk in the ground. It was a big beach towel and although the pup would have sprinted right off, because he was fairly desperate and secured, he peed pretty quickly given the opportunity.  It was a challenge and took a lot of wrangling. In addition to the towel, I tried to limit his exposure to unpopulated verges where not many dogs or people would be likely to frequent, so that the odd foot slip up wasn’t too high a risk. This boy had energy to burn even now.

Once at the airport it seemed unlikely that many dogs wandered and we took advantage of small grass verges near the car rental places to toilet him before the flight. When the time came to watch him be wheeled away, I worried the whole flight. Surely the noise would be terrible, I thought. At the other end I saw the small crate on the conveyer-belt. Sputnik (as he was subsequently named for his tendency to bark/beep and run round in circles), still trying to get that last piece of kibble from his Kong. Relief washed over me. Quickly, I picked him up and cuddled him. Fifteen minutes to drive home. We’d made it! Now for intros!

This would be our longest driving endeavour. Seven hours and seven minutes was the estimation to travel the 530km and then of course we had to come back.

I decided that we would need a break on the journey home and we booked in with a small back packers who were happy for me to bring the puppy along to sleep in the crate and fine for us to use their private garden for getting up through the night for toileting. We booked a room for ourselves to make it easier.

When I drove into the property that day a dog came barking out to meet us. Once the initial ‘greeting’ subsided however, I realized quickly that she was a very friendly and social dog. She was the mum as it happens and taking a well-deserved break from the pups.

I was taken to a small enclosure where all the pups were hanging out. The sire over by the house in the back garden, seemed proud and upright, no doubt wondering who this was.

Since we had been in contact for some weeks the puppy was already selected. I’d have the biggest boy, the first one born. He had 4 white socks and a little white flash on his chest. I don’t recall a lot more about that visit except that I left with a puppy sitting in a crate beside me.

Again, we travelled along with a towel for pee stops. We offered water each stop and a little food allowing it to settle before getting back in the car. Remember that right after water and food is the time the puppy will most likely poop and pee, so it’s good to give the dog a little time before resuming the drive.

This time there was little to no activity from the puppy. He drank a little and ate a little but appeared almost shell-shocked at times. Driving for an hour or two, then stopping, pulling out the towel and popping him in the middle, he would dutifully pee but not move at all otherwise. Eating at cafes, stopping briefly at gas stations and taking little walks. We got to the backpackers before night fall and everyone was watching television in the communal area, so we toileted him in the garden and joined them before heading to bed. I think I got up twice that night. Toto slept in a crate next to my bed. I probably trailed my hand through the bars of the little cat carrier he was in.

The next morning, it was as if someone flicked a switch in the wee puppies head. Almost 24hours after we met and after he left his ‘familiar’, he suddenly flicked his head, looked at me and started to bounce around the garden, sniffing, jumping and rolling. Relieved that I hadn’t in fact bought a ‘lemon’, we got back on the road for the rest of the trip. He was still very good about peeing on his towel but by now I think he had got used to that routine.

About an hour from home I picked up the other two dogs who had been staying at a kennels they knew well and we headed home where the careful work of introducing everyone to everyone began again.

Make your own story

I hope these stories help you to plan and consider your first journey with your new pup. Whenever possible it really pays to be in touch with your breeder or caregiver and ask them to help with any preparations that might help. Sputnik’s caregivers told me that they often popped him in his crate with dinner whilst they vacuumed and I think that was a well thought out plan for the short 50 minute plane ride. Not only did they help build a positive association to the crate but also got him used to the noises and hums like those present on a plane. I was very lucky that with every puppy there was a person (or group) who was helping to find the best ‘match’ possible for what would be a long and happy partnership. When you bring your puppy home you will be making your own story. Hopefully that story will be a long and happy one. 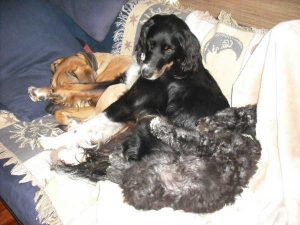 Aimee sadly passed 4 years ago but was my ‘heart dog’, with all her issues, it felt like a part of me died with her.
Sputnik (aka Bronson) will have his 13th birthday next week. He still enjoys his walks, rolls in the grass, digs in the puddles and generally loves life. He is my ‘goodest’ boy!
Toto will be 10 this year! He is my happy idiot, my clown and sometimes he’s a bit of a dick, but we love him for his cuddles and full body waggling. No matter what he does, he is always forgiven.