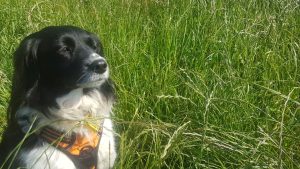 10 ways to help your dog self-regulate when prone to over-arousal!

Even though over-arousal in dogs has had a fair bit of attention in some training circles in recent years , in terms of actually considering it strongly in a training programme, it is far too many times overlooked.

In fact when I hear comments or posts where people say, “oh ‘this method’ or ‘that technique’ just didn’t work for me, my first thought is whether it was due to over-arousal (or under-arousal) being in play.

It is certainly something I can relate to given that I adopted a little BC cross dog a couple of years ago. Winnie the Pooh is a little dog who has really BIG feelings! Her tendency is to flip into over-arousal at the very slightest changes in the environment.
We have been experimenting with various methods and documenting patterns in her behaviour in an effort to really incorporate arousal manipulation into a training plan.

Arousal is the physiological and psychological state of being awoken or of sense organs stimulated to a point of perception.
Over-Arousal is excessive arousal!

If you consider the definition above, arousal is indeed necessary for every single task we (and our dogs) perform.
When arousal is at its optimum levels we are ‘firing on all four cylinders’ if I may use a rather old metaphor from an internal – combustion engine origin. At optimal arousal we will be performing at our peak, our greatest level of efficiency, speed or productivity.

So, arousal is necessary but where does it need to be, to be at this ‘magical’ optimum level and how do we get it there and help reduce the times our dogs tip into over-arousal?

… there is an optimal level of arousal which corresponds to peak performance but if arousal is too low, performance suffers.
At this end of the bell curve we often associate fatigue, disengagement, disinterest and inactivity.

At the higher end of arousal curve, over-arousal is associated with over-excitement, anxiety, panic and fear. Again performance is reduced!

In short, if we want to illicit good performance from our dogs, we need to be aware of where he(or she) is sitting in respect to arousal upon this curve.

Equally, if we can find ways of manipulating that arousal level, we can be directly influential in setting a perfect foundation for effective learning and good performance.

If we can find and adopt ways to manipulate arousal in the animal we are training, then we not only increase performance, we set our dogs and ourselves up to succeed as well!

Now every dog is different, so at any point where one exercise works perfectly to reduce arousal for one dog, it may induce frustration for another, so be cautious and observant.

A great ‘test’ for arousal is to pick a ‘default’ trick that the dog knows how to do very, very well. Ask him to perform it and rate the performance. If its sloppy, slow or worse, the dog can’t perform it at all, then chances are high, that over-arousal is in play!

Methods which may often decrease arousal include (but are not limited to) :

Practicing calm at home! If a dog is barking at passers-by for instance for many hours a day when you are out, then you’d do well to manage the environment to allow the dog to stay calm for more of that time.  Feeding Kongs, blocking street window access, etc. For the amount of time the dog is engaged in high arousal, he also needs an equal amount of downtime to recover.

This encourages the dog to go into a scent search using his nose.

Simply pattern feeding. Feeding one treat by your left ankle and then another by your right ankle with dog facing you. I was introduced to this by Sarah Stremming who incidentally also coined the phrase ‘Big Feelings’ which I just love because it sums up our little bc cross perfectly!

5. Allow your dog to sniff

Heck! Encourage it!  If your dog is a sniffer on walks, he could be doing well to help regulate himself. Sniffing is a great activity for dogs with some people rating it so highly, they term their walks ‘sniffaris’!

In short, reward your dog more for the behaviour you want especially in difficult situations. Just the actual act of eating can decrease arousal (assuming your dog ‘can’ eat : in extreme arousal or anxiety a dog may refuse to eat, which is a good indicator in and of itself that something in the environment may be pushing your dog above the arousal optimal level).

This game (coined/named by Absolute Dogs) encourages and rewards stillness in the close presence of a treat. When the dog is still the treat comes to them. Bouncing and lunging makes the treat retreat!

If your dog is over aroused then slow feeding might help. Nibblers can lick and nibble at a treat in your hand or you could try feeding from a squeezy tube that the dog needs to lick at to receive a reward.

I’m defining ‘triggers’ here as anything a dog alerts to so strongly that he appears to be unable to respond to anything else. Allowing some downtime from such events and then re introducing them in a more controlled way can be a good way to set foundations for a desensitization program.

Some dogs’ behaviour can become intense when they feel anxious. Where some dogs be withdraw, others will lash out, lunge and bark. There are various methods to reducing anxiety from medications, to T-touch ‘wraps’ to full and controlled desensitization with a professional.

Alternatively methods which may often increase arousal are :

Delivering treats actively, so tossing or cuing the dog to catch the treats rather than delivering to his mouth directly. Playing with a toy : Any game which mimics a part of the dogs natural prey drive, chasing (a ball), catching, running, tugging can increase arousal. Decreasing Anxiety : What may appear as under arousal could be inhibited behaviour due to anxiety. Determining what might cause the anxiety and ensuring the dog feels better about it will go a long way to improve the situation.

…then check your dog’s arousal levels.